Go Ahead, Search our Blogs! 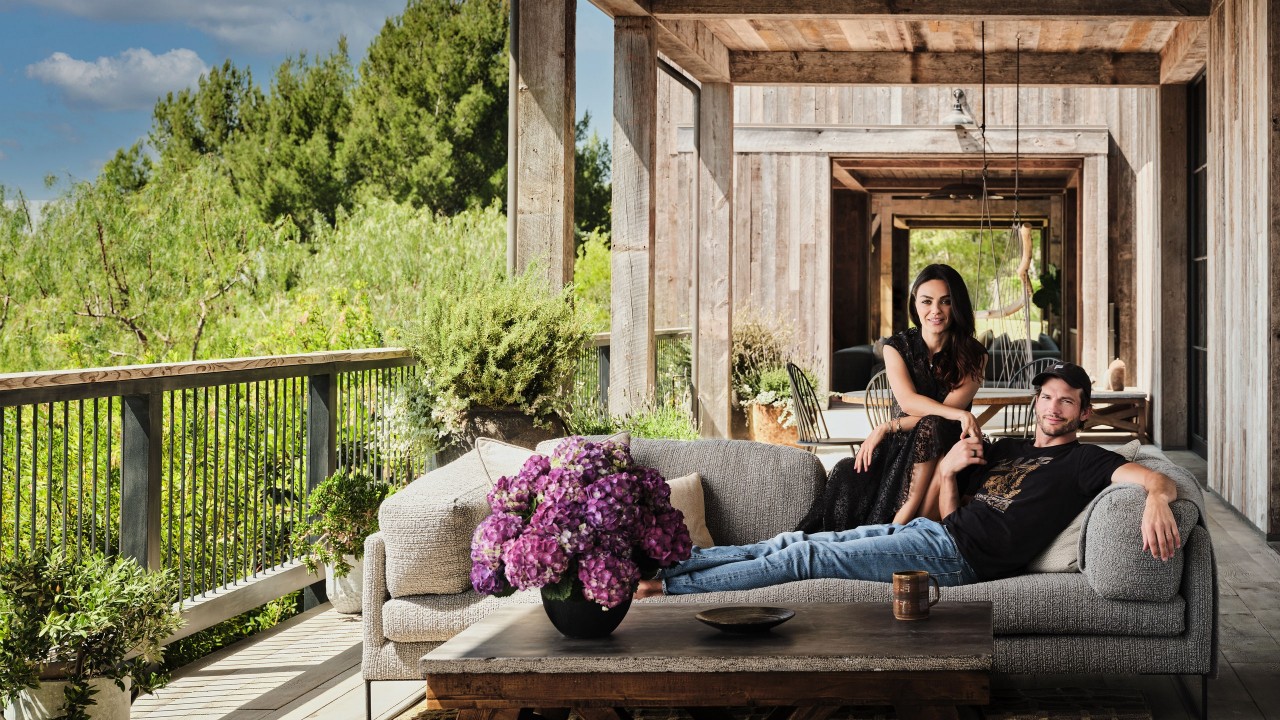 There’s surely some Beverly Hillbillies quip that pertains to the home that actors Ashton Kutcher and Mila Kunis have built on a glorious hilltop site perched above the storied Los Angeles enclave. After all, the high-powered Hollywood transplants—he’s from Iowa; she was born in Ukraine—dug a well on the property to irrigate the land, planted (and harvested) a field of corn during the COVID lockdown, and dubbed the place KuKu Farms. But while Jed, Granny, and the rest of the Clampetts embraced a far more traditional take on Beverly Hills splendor—the sprawling French Neoclassical mansion pictured in the series credits was designed by architect Sumner Spaulding in the early 1930s and renovated by the legendary designer Henri Samuel in the 1980s—Kutcher and Kunis approached their passion project from a decidedly more modest perspective.

“We wanted a home, not an estate,” Kunis insists, describing the six-acre property that now accommodates a main house connected to a guesthouse/entertainment barn, as well as a freestanding barbecue pavilion, all arrayed along a central axis elaborately plotted to capture the beguiling views from, between, and through the various structures. “We wanted the house to look like an old barn, something that had been here for decades, that was then converted into a house. But it also had to feel modern and relevant,” Kutcher elaborates.

The design-obsessed duo launched their five-year adventure by assembling independent Pinterest boards to flesh out their personal visions for the project. “Building a house from the ground up is no small thing. This was either going to make us or break us,” Kunis says of the potentially divisive undertaking. Happily, their aesthetic predilections seemed to dovetail neatly. “When we looked at each other’s boards, 90 percent of the images we selected were the same, and most of the houses we pinned were designed by Howard,” Kutcher recalls, referring to architect Howard Backen of the AD100 firm Backen & Gillam Architects. 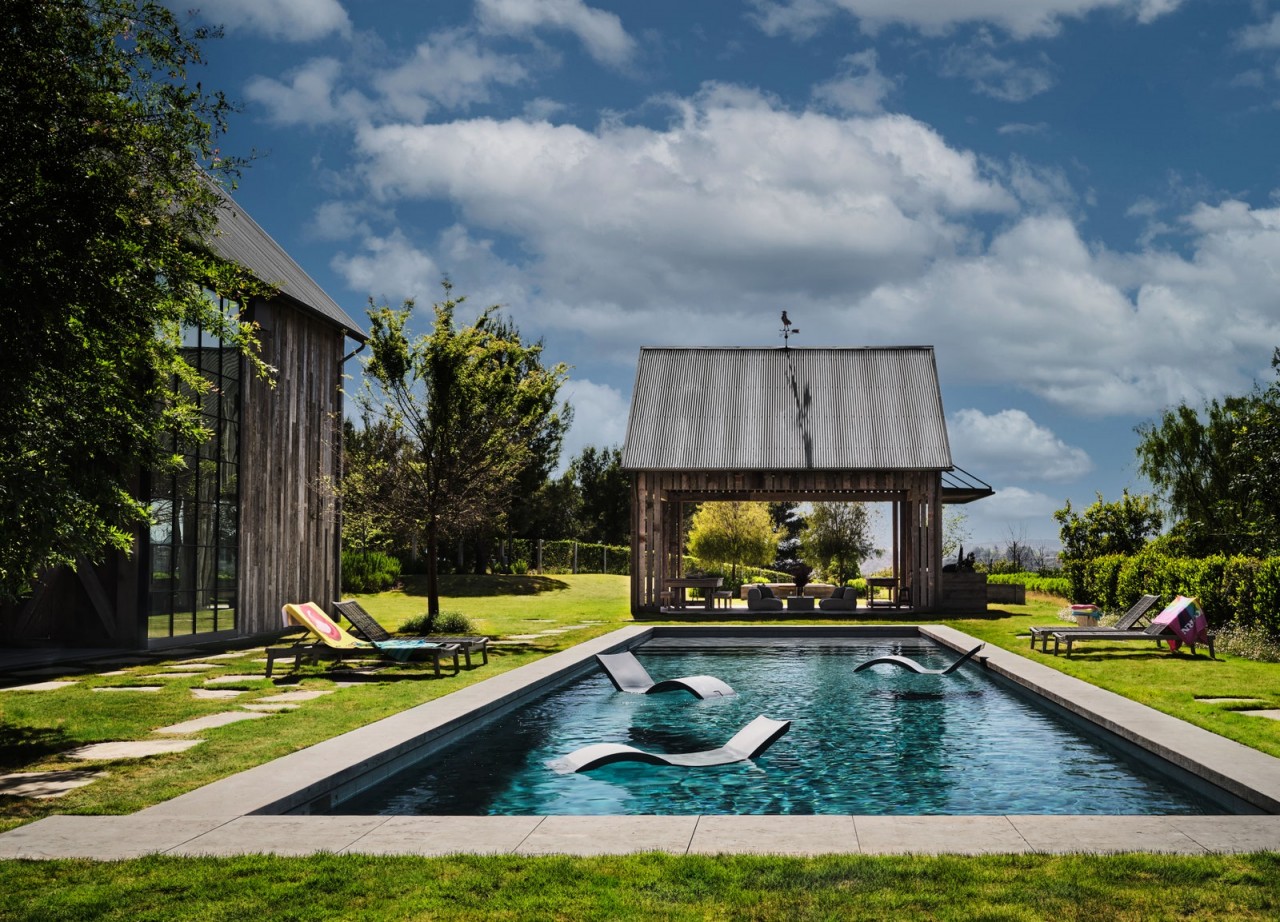 Backen, of course, is a master of the so-called modern farmhouse, renowned for his ability to coax a sense of poetry and a bright, contemporary spirit from distilled vernacular forms and rustic materials. The Kutcher/Kunis residence is a testament to his alchemical handling of reclaimed wood, board-form concrete, and glass. “Howard is like a great software designer, someone who approaches design as an accentuation of function,” says Kutcher, who has broad experience in technology start-ups. “A software designer wants to get people where they want to be with the fewest clicks. Howard wants to get you where you want to be with the fewest doors and obstacles. He also knows that there are certain places where you want a barrier to mark a threshold and create a little friction,” Kutcher adds.

For his part, Backen returns the compliment. “Ashton and Mila are two of the smartest, most inquisitive people we’ve ever worked with. We talked about everything from beam sizes to the details of the cross bracing to the junctures of the wood planks and concrete. These are not the kinds of conversations we have with every client,” says the architect. 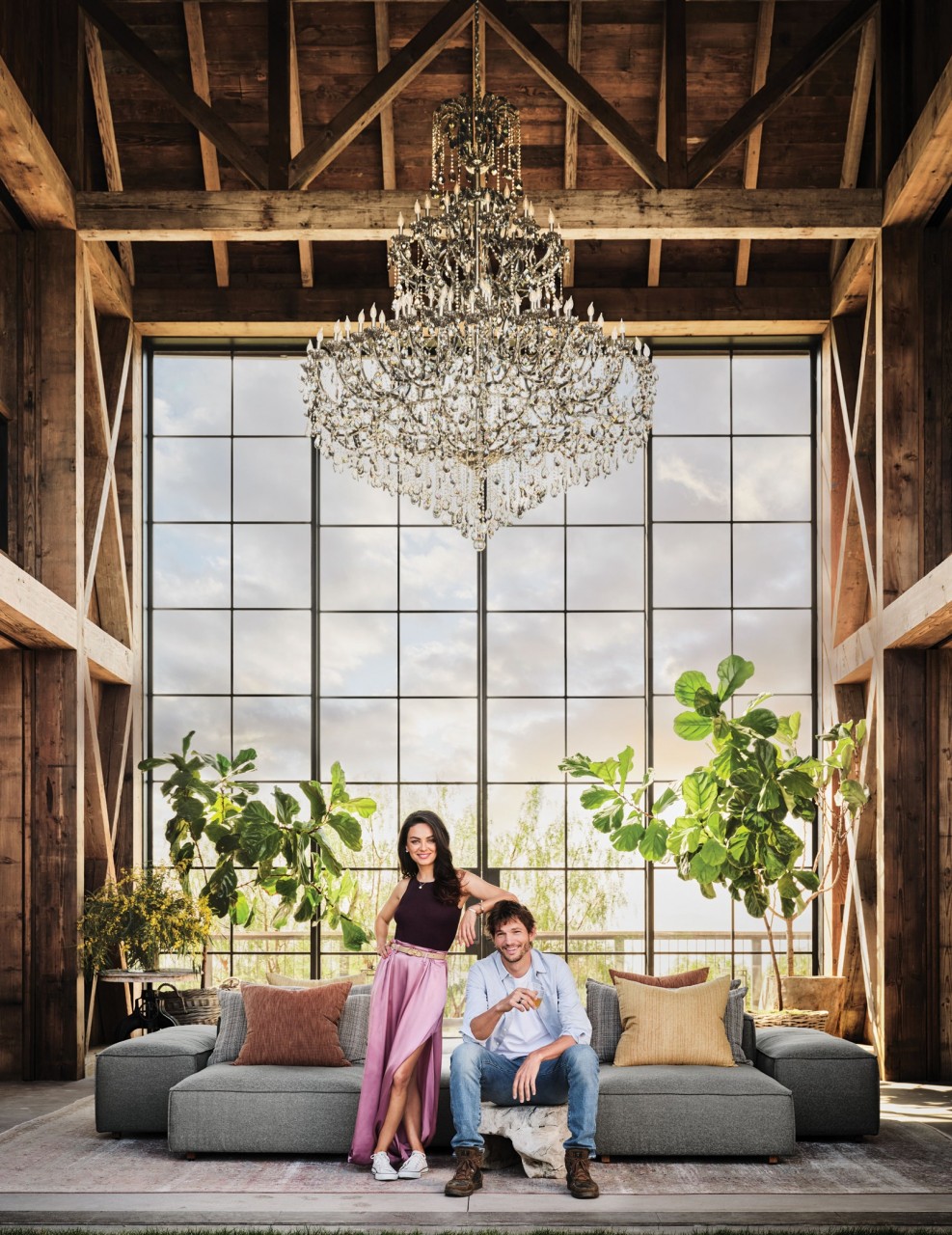 Stephanie Gerwin, Backen’s associate, seconds the notion. “They were out there with us, as genuine members of the design team, for every step of this long and complicated process,” she notes, emphasizing the couple’s commitment to creating a sustainable, nurturing home for themselves and their two young children, Wyatt and Dimitri. The house is entirely powered by photovoltaics, concealed from view above the expansive porch that stretches along one side of the main structure. In fact, the house’s solar array produces significantly more power than the property requires, although antiquated municipal codes don’t exactly encourage energy sharing—
a situation the homeowners hope will change in the future. “Ashton and Mila are concerned about the quality of the soil, the purity of the food they eat and the water they drink. The ideals of sustainability and regenerative farming aren’t just abstract concepts to them,” Backen avers.

The house’s refined architectural vocabulary and rugged materials palette provided a springboard for the work of AD100 interior designer Vicky Charles of Charles & Co., who joined the project just as she was exiting her post as global head of design for Soho House. “We were obsessed with Soho Farmhouse and other projects Vicky spearheaded. We loved the way she mixed fabrics, patterns, textures—really her whole aesthetic,” Kunis says. 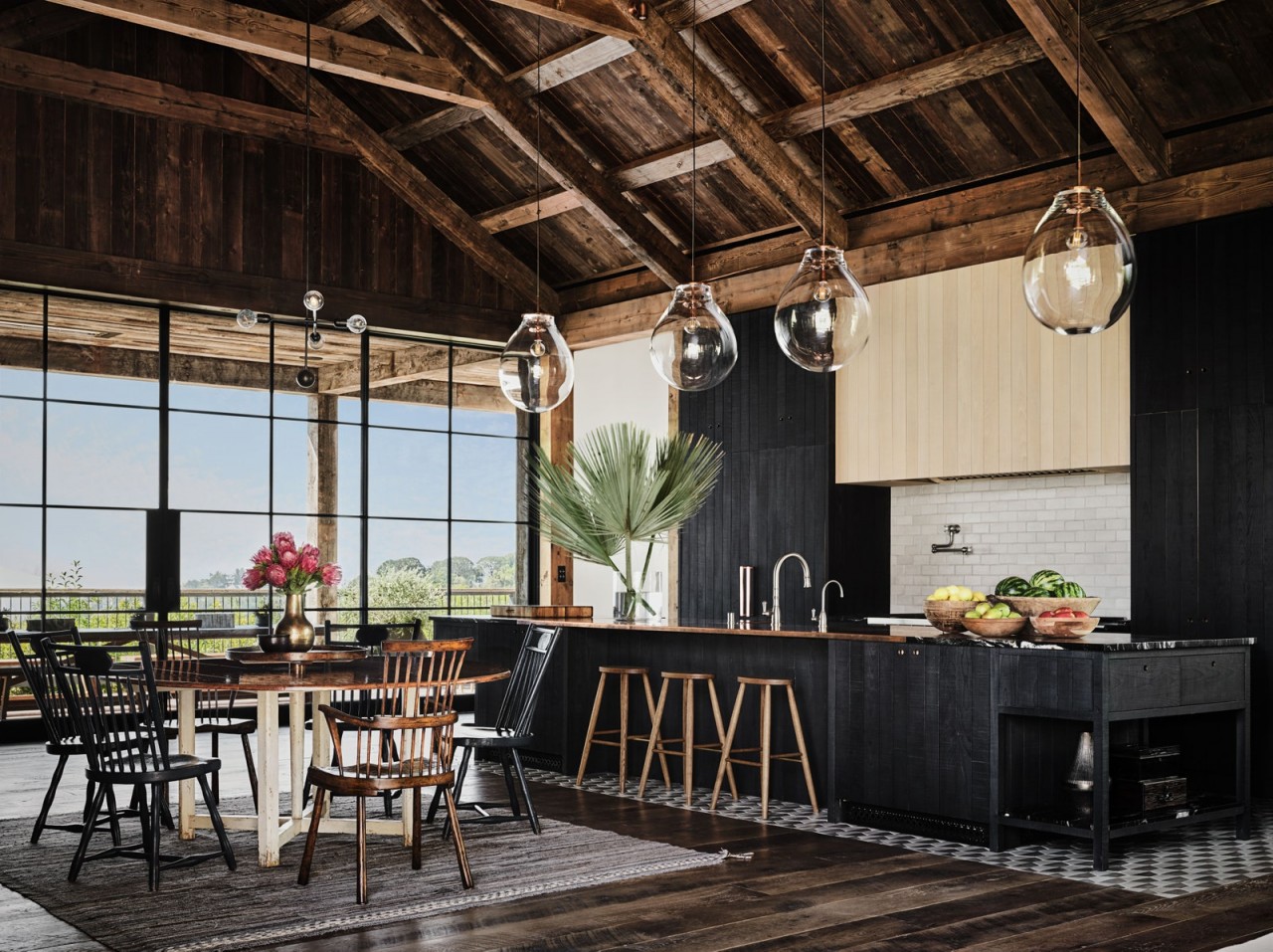 “Mila was pregnant with their first child when we began this journey. We spent months looking at materials and colors to find the right visual language. Our conversations were not just about the land and the architecture but also about the future of their family,” Charles recalls. “Over time, the design moved away from a traditional farmhouse aesthetic to something more contemporary. Wrought-iron chandeliers and big chesterfields were the wrong clothes for this body,” she adds.

In addition to new, crisply tailored tables and plush, super-comfortable seating, Charles incorporated elements from her clients’ previous homes, notably a set of custom silver throne chairs that Kutcher commissioned on a trip to India and an extravagant 10-foot-long crystal chandelier that seemed completely antithetical to the architecture’s humble forms and timeworn materials. “I got this job because I promised I could make a home for those, shall we say, formidable pieces,” Charles jokes. Ultimately she placed a pair of chairs in the primary bath—thrones for the throne room—and installed the chandelier in the towering entertainment pavilion. “We thought it would be funny to have this incredibly opulent thing hanging in a barn. It kind of takes the piss out of the property,” Kunis says of the improbable crystal confection.

Notwithstanding those notes of self-effacing levity, the soul of the Kutcher/Kunis residence remains tied to the meticulous planning and fanatical attention to detail that the homeowners and their designers lavished on every aspect of the project. “To feel tranquility in a space, everything needs to be in order,” Kutcher concludes. “If the world around you isn’t in order, it’s hard to get your brain in order. When we’re in our home, the world just makes sense.”

When you subscribe to the blog, we will send you an e-mail when there are new updates on the site so you wouldn't miss them.

The Importance of Proper Design for Your Private S...

Letter from the Owner

Thank you visiting our updated website. So why Future Home?  What makes us unique in the recently crowded field of home technology firms?

Thank you for reviewing our credentials, concierge plan, portfolio, services and honors. I look forward to speaking with you soon.

Please note: we have discovered most other company websites use stock photographs provided by manufactures.   Each and Every photo on our site is a Future Home project.